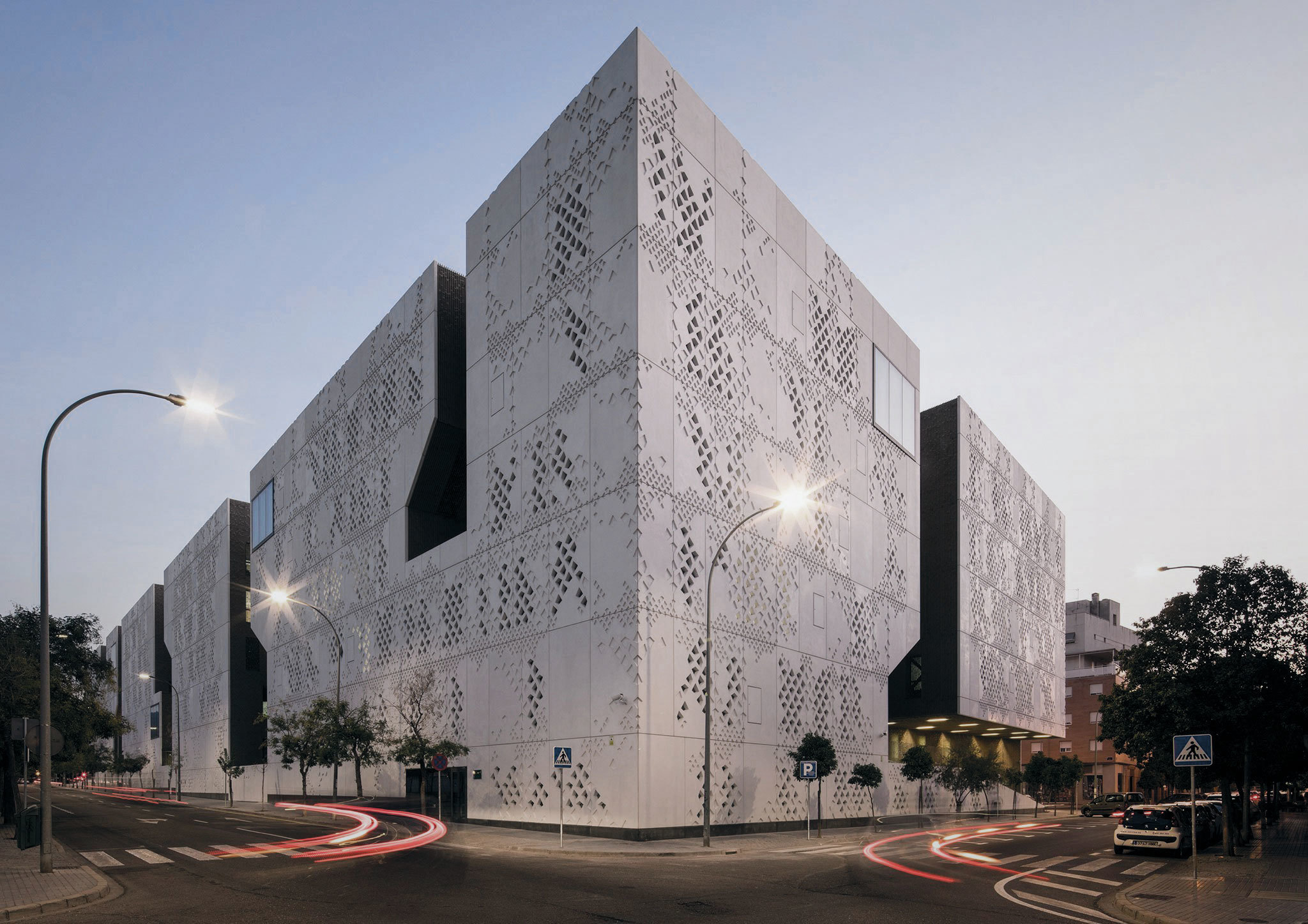 The BIM experience of the City of Justice of Cordoba is an innovation experience, promoted by a Public Administration, the Ministry of Justice and Interior of the Junta de Andalucía, during the construction of a relevant infrastructure: the new headquarters Cordoba’s Court Complex.

To understand the challenge that this experience has meant ewe need to go back to 2011.

It is in that year that we became aware of BIM, and its applications in other public organizations in the world. But we felt it was at an early stage, apart from isolated initiatives in different administrations and technical departments of developed countries like in the USA, the Nordic countries, Singapore, etc.

In May 2011, the first government initiatives started to appear, specifically the declaration of intentions of the United Kingdom’s Government (through the Government Construction Strategy) envisaged support and lead BIM implementation in its construction industry, with the aim to make it mandatory in public procurement from 2016. It was a national commitment that required a major change in the construction sector and challenged the technological and economic leadership of the market.

At the time, our economy was in a serious financial crisis, which deeply affected the construction sector and public investment in infrastructure. This was why we felt the obligation to help alleviate the negative effects according to our capabilities and possibilities. The objective was to seek new and more efficient productive working methods and services that would help the recovery and viability of the sector, as well as to train and manage the change in the development and renewal of public investments as other countries and organisations had done around the world.

Improving competitiveness and fostering the innovative capacity of companies, as stated in Law 2/2011, of March 4, on a Sustainable Economy, were also taken into account, under which the public works authorities were obliged follow, among others through training, research, innovation and the use of new technologies, in order to increase the capacity to compete, and help to develop a policy of support for research and innovation that would favor both innovative companies and industries, and the renewal of traditional sectors, in order to increase their competitiveness.

To the above, we needed the much needed transition to electronic administration, which was already established by Law 11/2007, of June 22, on electronic access of citizens to public services, by which the public administration itself, governed by the principle of efficiency, had to change in order to transfer the benefits derived from the spectacular progress made in the field of information technology and electronic communications to the   citizens. There was also the conviction that this digital transformation led to electronic public procurement, which would come to be confirmed later, as early as 2014, with the new European Public Procurement Directives.

BIM was understood to be the means of digital transformation in the promotion and operation of public infrastructures, and that its implementation in the Public Administration meant a benchmark for the architecture, engineering and construction sector of our environment.

For all these reasons, BIM had to be implemented in the technical services department of our organization.

But how to implement BIM? There was no knowledge in our country, nor were there any case study experiences or practices that could guide our transfer to BIM. We  did not have the resources to contract services for the implementation of the BIM methodology, nor was there any commercial offer or specific suppliers to do so or acquire BIM applications for their knowledge and learning

That is when the City of Justice of Cordoba presented the opportunity to undertake a BIM pilot experience, for its learning outcomes, acquisition of resources and applications as well as BIM implementation in the processes and procedures of the technical department of the Ministry of Justice.

It was at the beginning of the execution of the contract, in the study and development of the preparatory actions for the construction phase of the new judicial headquarters, when the opportunity to carry out the BIM experience was identified. This opportunity was stated in the “Guideline for the identification, analysis and determination of Activities and Processes in the management and monitoring of the execution of the Contract of the City of Justice of Córdoba”, which was drafted in April 2012, for awareness and the knowledge sharing of intervening actors regarding the processes, milestones, benefits and deliveries required by the contract for the construction and operation of the new judicial installation.

The contract included, among other improvements, an execution control service during construction, at the disposal of Public Works, paid by the successful bidder by virtue of its tender offer.

This control service was designed for the verification and control of the performance of the building, so that project requirements were reached. It was carried out in three lines of action:

In the case of the BIM experience, the challenge was addressed on the basis of:

Once the decision to start the BIM experience was made, the parties were invited: the architects and the main contractor to develop the “BIM Execution Plan”, which sought verification and control during construction. For this process, different BIM phases were proposed:

It included the modelling of “2D” project information in “3D”, comprising of three BIM submodels: architecture, structure and facilities.

Through this modeling phase, the review of the project is achieved.

From the BIM submodels developed in the previous phase, coordination took place validating the different disciplines, architecture, structure and MEP. The use of Solibri Model Checker proved its worth as a tool second to none.

From the result of first coordination, it was envisaged to include the subcontractors and main trades to the experience, to guarantee the “constructibility” of the constructive solutions.

In this phase, the information resulting from the coordination phase is checked and updated after verification of the as built.

This phase would come in place whenever the real construction overtook of the coordination of the previous phase.

In this phase the aim was to include the information of the equipment and products installed directly from the manufacturers and suppliers, through the IFC files or through the completion of tables and forms, with the level of information necessary for the inventory and the subsequent phases of commissioning and maintenance. It is about avoiding the tasks of incorporating data into the model by third parties, other than those responsible for generating the information. This could eliminate tasks and intermediate steps, reducing time and ensuring the quality of the information, by preventing its transfer by non-specialized users.

Initially, it was intended that the software required in the Contract’s Terms and Conditions, as an Operational Control Computer Assisted Tool “(HICE) to monitor the availability of the building services and equipment during its working life, agreed upon by contract, will be implemented on the basis of a Facility Management (FM) applications with the BIM models, obtained during this phase.

“Once again the use of open BIM and capacity to simply filter and extract information from the federated models was decisive and thanks to the amount of information and modeling that went in, the timing was reduced remarkably.”

This experience was proposed in a parallel project to the “traditional” execution of the contract, so as not to interfere in a negative or distorting manner, and in parallel to add value to the coordination and contribution of information between the parties, with the consequent learning outcomes and the extraction of resources and results for future contracts.

The plan was based on fundamental criteria such as:

These phases, along with the paticipation and collaboration of the different agents, brought very interesting results.

As a result of the flexibility and adaptability of this experience, when it finished, a further phase took place.

In this phase the aim was to coordinate the tenant’s take over and commissioning. Once again the use of open BIM and capacity to simply filter and extract information from the federated models was decisive and thanks to the amount of information and modeling that went in, the timing was reduced remarkably.

The 50,000 m2 building, had to be moved in by the tenant keeping the structure of traditional judicial planning of unipersonal organs (Courts) and not in accordance with the planned design of the new organization of the “Judicial Office”, in the shortest time possible. The coordination between the foreseen spaces and their availability plus their final real use was possible in record time thanks to BIM, the information generated in the process. Added to this were other possibilities and functions such as the coordination of building services and assembly of the new equipment for building of the size of the City of Justice of Córdoba.

Thus, the whole process of this BIM experience culminated with the inclusion of final suppliers, as was the case of the new furniture suppliers, by using the BIM library in the supply bidding and their participation in the experience for their benefit and to shorten its installation and assembly deadlines.

At the end of it all, this experience, despite the challenges faced and the risks, has more than compensated for all the effort, for the result, the benefits, the knowledge and the lessons learned. Another by product has been the commitment of the public initiative towards future BIM projects.

In the commitment to innovate, the BIM experience of the City of Justice of Córdoba has been an initiative similar to other experiences in countries where BIM has been common practice, like the case of the pilot projects of the Ministry of Justice of the United Kingdom, a leading organization in the field of BIM implementation for the management and promotion of its assets.

Given the circumstances, this value add experience has demonstrated the leadership by the Junta de Andalucia as a public administration that has taken on the challenge of the technological, social and economic change for the common wellbeing of its citizens.