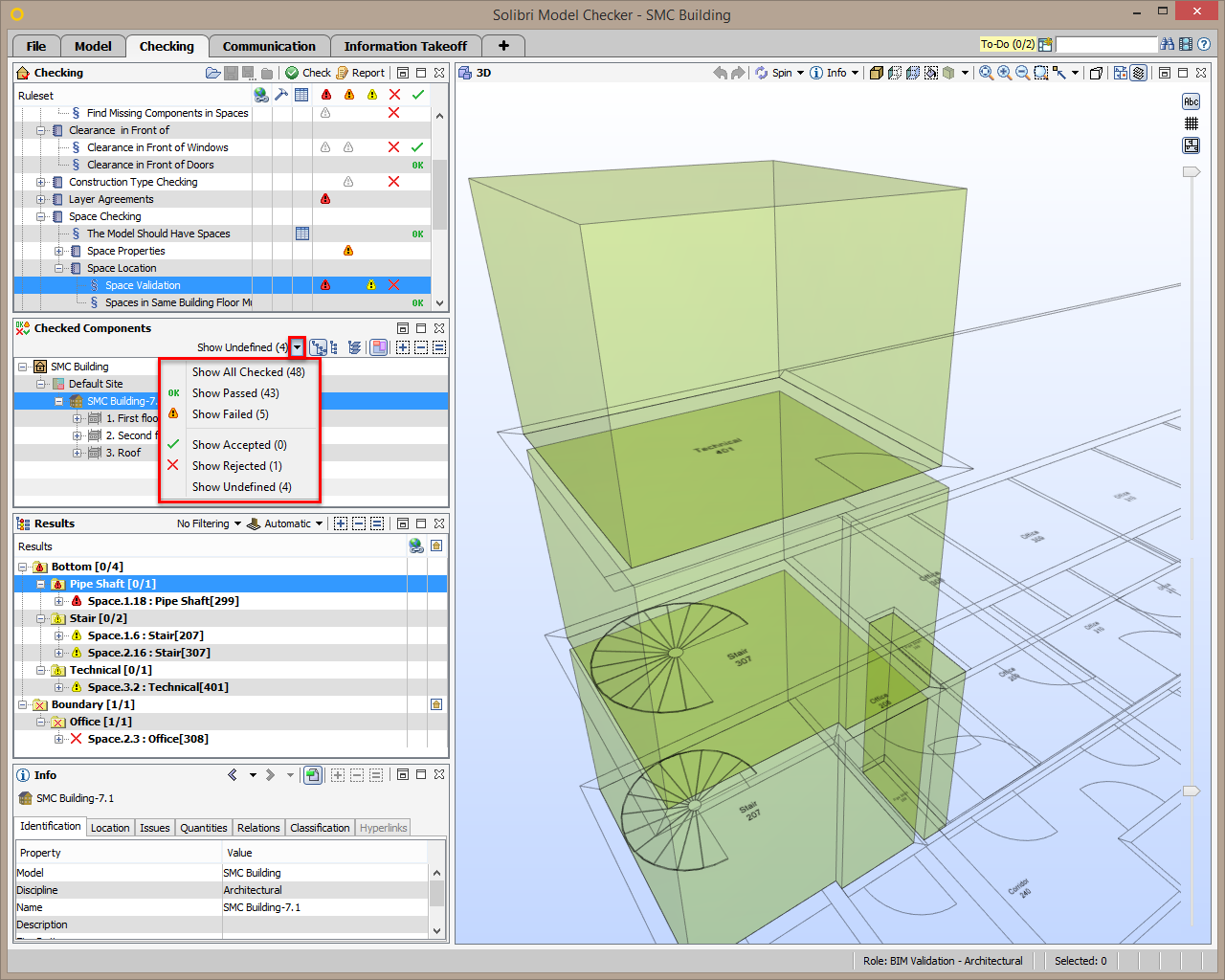 You can follow along with the examples in this article by opening the SMC Building.smc file that comes with SMC.

To open the Checked Components View, click the Add View

Checked Components. A drop down box allows you to select one of the following categories:

Similar to the Model Tree View, you can organize components in the tree of the Checked Components View by selecting either the Containment Hierarchy

.  Below we’ve selected the rule Find missing Components Above in the Checking View, and selected All Checked in the drop down of the Checked Components View.  By switching to the Component Hierarchy

, we see the listing of the 145 walls and columns in the model grouped by their type that were checked using this rule:

By selecting Show Passed, the tree lists all components that passed the check, as these components have a component touching them from above that was defined in the Touching Components Filter Parameters Table.  By switching to the Containment Hierarchy, you are able to select components from specific stories in the building, thereby isolating those components in the 3D View.  Below we see the walls on the second floor that pass this check:

By setting the dropdown to Show Failed, we can view the 9 columns on the Second floor level that fail this check, as they have no components above.

By setting the drop down to Show Accepted, we see 2 balcony walls on the First floor level that failed the check but were considered non-issues when reviewed.

By setting the drop down to Show Rejected, we see the 9 columns again on the Second floor that failed and were rejected as actual issues since they should be supporting a roof that touches them from above.

All issues were reviewed and either accepted or rejected for the rule Find Missing Components Above, which is why no components are listed as Undefined.  Notice you can easily tell that all issues were defined in the Checking View as well, as their severity icons are grayed out.

Selecting the Space Validation rule in the Checking View, and selecting Undefined in the drop down box of the Check Components View, you’ll see that there are four spaces listed as Undefined near the stairwell.  Also notice, the drop down box itself lists the counts of components of each category.  To summarize the listings of the Checked Components View for this rule, of the 48 spaces that were checked, 43 passed, while 5 failed with issues.  Of the 5 spaces that have issues, only one space was reviewed and rejected as an actual issue, while the remaining 4 spaces have yet to be accepted or rejected and are listed as undefined:

This has been an introduction to one of the very powerful features of SMC, and hopefully it gave you some ideas on how it could benefit your workflow.