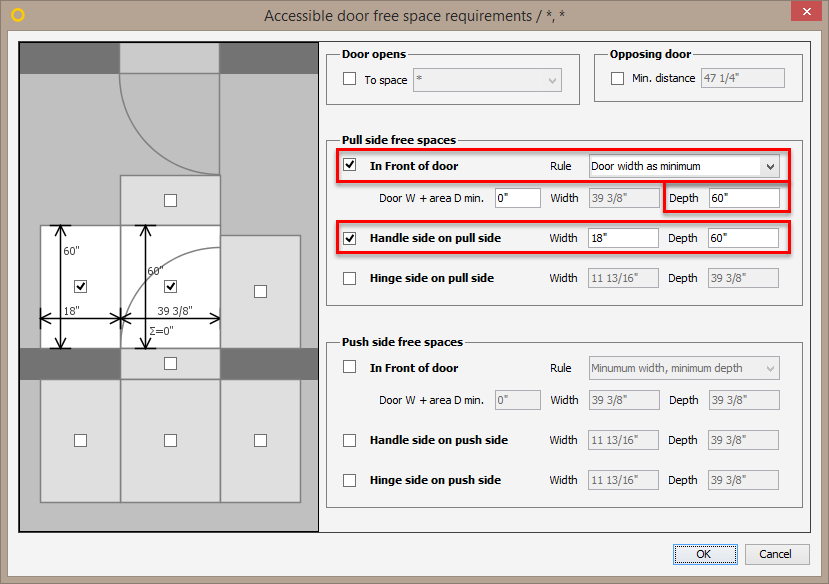 The just released version (9.6) of Solibri Model Checker (SMC) includes significant enhancements to the Accessible Door Rule – SOL/208.  The following article describes those enhancements in more detail.  The example model, ruleset, and classifications used in this article can be downloaded from the link below:

Prior to this release, door maneuvering requirements were limited to a single free area in front of the push side of the door (free door back side), and a single latch side area on the pull side of a door (Free Door Side).  Also, the width of the free area in front of the pull side (Free Door Front Side) and push side (Free Door Back Side) had to be entered rather than being based on the actual width of the door:

Above we see a check for maneuvering clearances for a front approach on the pull side of a door based on the requirements found in the ADA standards as issued by the Department of Justice (DOJ):

This rule ensures that single swing doors have a maneuvering space that extends 18 inches (455 mm) minimum beyond the latch side of the door and 60 inches (1525 mm) minimum perpendicular to the doorway for a front approach on the pull side.

The maneuvering clearance requirements for accessibility of a door depend on the approach (front, hinge, or latch) and whether the door is equipped with a closer and latch.  The Accessible Door Rule – SOL/208 does not have a component filter table to check specific door types; however, you are able to pass specific doors to the rule through self-configuring (gatekeeper) rules.   A detailed explanation of self-configuring rulesets can be found here:

As an example, single swing doors that have a latch approach on the pull side equipped with a closer should have a maneuvering space that extends 24 inches (915 mm) minimum beyond the latch side of the door and 54 inches (1525 mm) minimum perpendicular to the doorway.

In the image below, we see a door that leads from a corridor to a balcony that has both a closer and latch with a latch approach on the pull-side as specified by its properties under the property group “data”.

By classifying these doors based on their approaches and whether they have a closer and latch, these properties can be checked in the “Components to Check” filter parameters table in a gatekeeper rule to only pass those components based on those properties.

Here we see the previously mentioned door fails the requirements as the balcony wall intersects the required free area that extends 54″ perpendicular to the door: