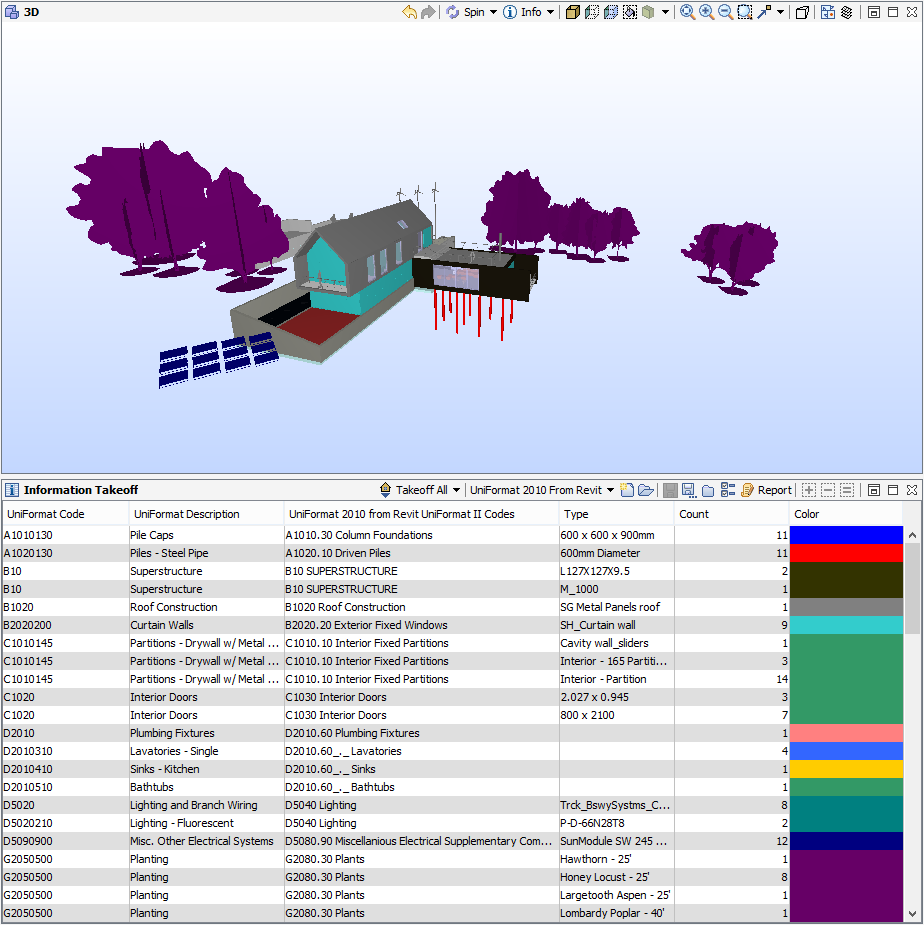 The following article will demonstrate how you can visualize and check components based on their UniFormat categories within Solibri Model Checker (SMC).  As an example, if you are using UniFormat II categories for cost estimation, you’ll need to ensure that the UniFormat codes in the model match the version used in your estimating sheets.  If UniFormat II is being used and you import a window library that used UniFormat 2010 to classify itself, its C1020 Interior Windows UniFormat 2010 category may cause those components to be classified as C1020 Interior Doors in UniFormat II, thereby incorrectly raising the cost of doors, while lowering window cost.  In SMC, you are not only able to check that the UniFormat description matches, but that the components classified as C1020 Interior Doors are in fact of the door component type and not windows.

Furthermore, through classification, different versions of UniFormat can be mapped to one another. Therefore, if you are using Revit, you can automatically map its specific UniFormat II codes to UniFormat 2010.

The resources and sample model used in this article are available here: UniFormat Check

Please read the ReadMe.txt file in the zip folder for information on copying resources to their proper locations.

The model used in the example is an IFC export of the rac basic sample project.rvt. The sample project from Revit is also available here: Autodesk Revit 2014 Sample Project Files

UniFormat is a standard used to classify components, based on their function, into hierarchical categories. It is used in specifications, such as those for Level of Development (LOD), as well as cost estimation/analysis. Since these are standardized categories common to most buildings, it provides consistency in project management, analysis, and reporting.

Hierarchical classification systems that use numerical codes such as UniFormat, MasterFormat, OmmiClass, UniClass, etc. lend themselves well to Solibri Classifications through the use of classification rules that include the asterisk (*) wildcard matching character, which matches zero or more characters.   For example, A1030* matches A103003 Trenches, A103004 Trenches, A1030._ Trenches, A1030400 Trenches from the various UniFormat versions for the Trench UniFormat II category to A1030 Slab on Grade. Likewise, through the use of mapping classifications, you can map to properties in multiple locations such as Identity Data.Assembly Code or some other location where you are storing UniFormat information in your components.

The following classifications are used both to visualize and check components based on their UniFormat category:

The UniFormat Check ruleset checks components in the model to ensure that UniFormat codes are defined and are correct based on UniFormat II or UniFormat 2010.

Since the codes and descriptions vary depending on the version, you are initially prompted to set the ‘UniFormat Version’ user input in the To-Do dialog.

Once the UniFormat Version is set, the ruleset should look similar to this:

By selecting Show Passed in the Checked Components View, we see the 108 components isolated in the model that passed the check and do have a UniFormat code:

The rule Sub-Components must have a UniFormat code checks the UniFormat Code classification of components that decompose other components such as the railings of a stair component or the doors, plates, and members of a curtain wall, to ensure that a UniFormat code has been defined, regardless of what it is. Looking at the results we see that none of the 201 sub-components pass this check, as these do not have a value for a UniFormat code: